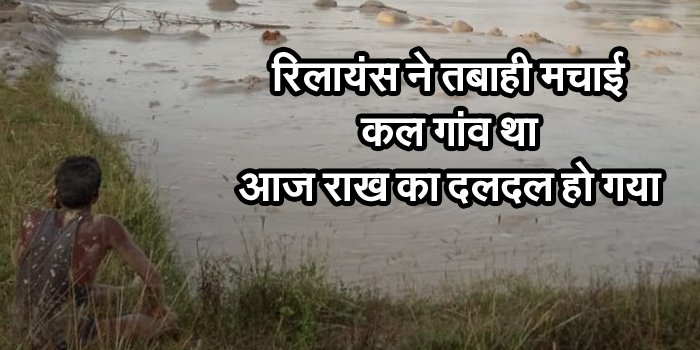 Singrauli. Collector Mr. KVS Chaudhary has ordered a magistrate inquiry against Reliance Power Plant. A dam located in this plant filled with water and ash. The date was broken at 5:00 pm on 10 April 2020. Due to this 2 people died while 4 people were missing. There has been no update from Collector Singrauli in the last 16 hours (this news was written on 12 April at 12:30 pm). Whether or not the missing people were found alive or not, what happened in the rescue operation, Collector Singrauli has not told. In politics, people even say that Shivraj Singh has exactly the same relationship with Reliance’s Sasan Ultra Mega Power Plant as the late Mr. Rajiv Gandhi had with Union Carbide.

How many deaths, how much damage due to Reliance power plant in Singrauli

The total number of deaths and damage caused by the Reliance Power Plant in Singrauli, Madhya Pradesh, has not yet been estimated, but villagers say that about 200 acres of land has been destroyed. The house pond farms built on this land were all ruined. Hundreds of animals were buried under the rubble. The bodies of two villagers have been found, while the employees of Reliance have also died, which are being hidden. The administration has admitted that four villagers are missing while villagers say that more than a dozen people are missing. The entire surrounding area has turned into ashes. 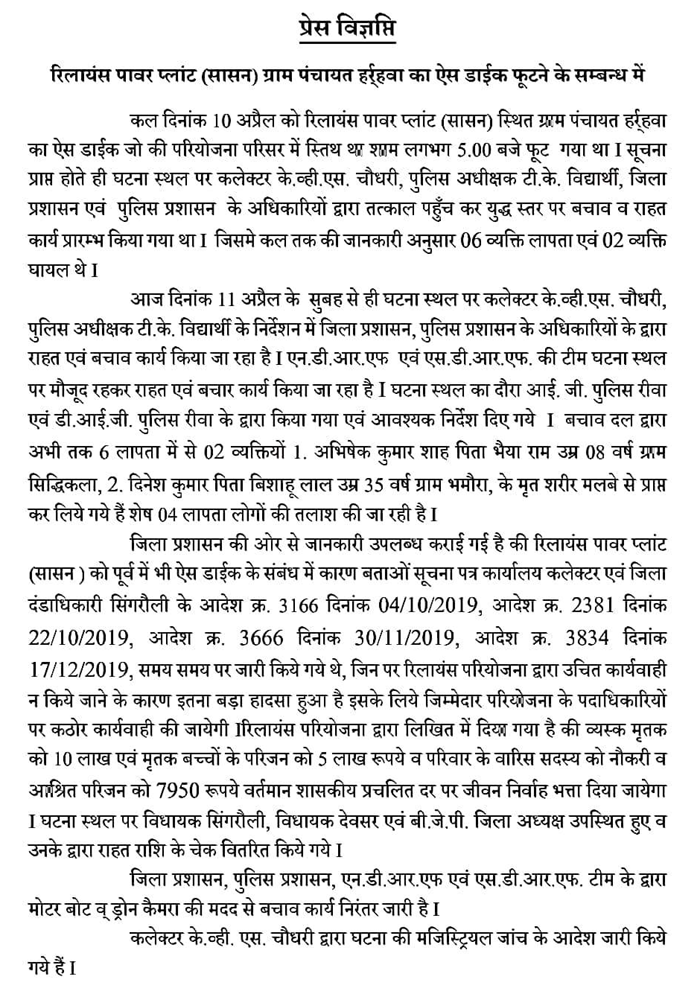 Since the matter is related to Reliance Power Plant, it cannot be said with full confidence that the words of the document issued under the signature of the Collector, but Collector Shri Chaudhary has told the media that Reliance Power Plant was formerly known as Ash Dyke ( Show cause information in respect of the dam in which the plant is filled with ash and water) by the Collector and District Magistrate, Singrauli Country number 3166 dated 4 October 2019, order number 2381 dated 22 October 2019, order number 3666 dated 30 November 2019, order number 834 dated 17 December 2019. Due to not taking proper action on which this accident happened.

The Collector has told the press that strict action will be taken against the project officials responsible for this accident. Apart from this, it has been given in writing by Reliance Project that Rs 10 lakh will be given to the adult deceased and Rs 5 lakh to the families of the children. The successor will be given a job and a dependent ₹ 7950 (official prevailing rate) of life subsistence allowance.

Friendship is also with Kamal Nath and Digvijay Singh

When it comes to the relationship with the Reliance Company, it is also important to mention that in the list of friends of Reliance in politics, not only Shivraj Singh’s name is mentioned, but also the names of former Chief Ministers Kamal Nath and Digvijay Singh. People say that the best friendship with Reliance is that of Kamal Nath. It was he who built Reliance’s relations with Shivraj.

Sasan Ultra Mega Power Plant or Sasan UMPP is one of the four Ultra Mega Power Projects planned by the Ministry of Power, Government of India. It is located in Sasan village of Singrauli, Madhya Pradesh. The total project value of Sasan UMPP is ₹ 25,186 Crore (₹ 251.86 Billion). The plant is operated by Sasan Power Limited, a subsidiary of Reliance Power Limited which was incorporated on 10 February 2006.

Most read news on 12 April

Why keyboard buttons are not ABCD (alphabetical), is there any reason or mistake
How do the police know the number of the bogie when the chain is pulled
Muslims in Indore excavated graves in advance, waiting was going on in the cemetery
Gwalior Bazaar now preparing to open in 3 parts
Vegetable to open 24 hours Shop, new plan for farmers too: Shivraj Sin Chauhan
Why do wife call her wife, is there any logic or just for honor
Applying teachers on corona duty, demanding PPE and INSURANCE
Madhya Pradesh: 78 new positives, total 529, 22 districts, 14 serious, 437 stationary | Corona Bulletin
A special tunnel to be built on the platform of the railway station
Appointed Registrar, brother of Minister Narottam Mishra between lock down
Middle Seeking President’s rule in the state, MP Vivek Tankha wrote a letter
Chanderwad was hiding identity in Chhindwara
Panchayat secretaries also insured 50 lakh and PPE KIT Mange
Madhya Pradesh: 12th Icsha will not ever re-admission in college
Corona fighter Vandana painful death of Ti, ranging from DM does not help anyone to CM
MP: Hey! Government, fame opportunities will also come later
Constable Anand Corona reached Jabalpur after walking 450km to do duty
Women took 5-5 hundred of Jandhan in Bhind 10- 10 thousand bond was filled (see video)