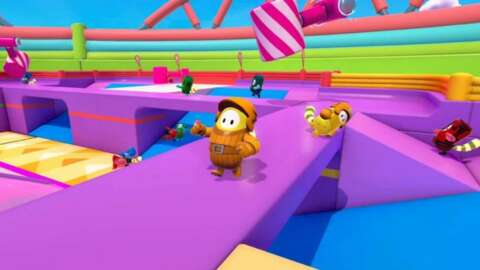 Fall Guys Season 4.5 update is coming on May 13, and it adds two new rounds, improved custom games support, crossplay, and plenty of bug fixes. Christened “Dave” for some reason, the update also stomps a lot of bugs that have cropped up recently. The full patch notes are below, so check it out.

The main additions that the Season 4.5 update brings to the table are two new rounds. One is the Slimescraper, which is the sequel to Slime Climb, and the other is Button Bashers, which splits players into pairs that must duel it out to see who can mash buttons better. The patch will also bring 55 new variations to the game’s many modes across 12 rounds, so if you’re a bit bored of the current offerings, that’ll hopefully change it up for you.

You need a javascript enabled browser to watch videos.

Want us to remember this setting for all your devices?

Please use a html5 video capable browser to watch videos.

This video has an invalid file format.

Please enter your date of birth to view this video

By clicking ‘enter’, you agree to GameSpot’s

🚨 Season 4.5 (Dave) is coming out tomorrow 🚨
🔥 Here’s a BIG LIST of patch notes 🔥
To start with… we have 2 new rounds!
– The Slimescraper (A sequel to Slimb Climb) 👀
– Button Bashers (Players are split into 1v1 duelling pairs. Best beans go through) 👀 pic.twitter.com/j044J0Elli

In terms of bug fixes and quality-of-life improvements, this update brings a bucketful of minor changes. For example, grabbing objects and mantling should now suffer from less latency, and there’s an in-game indicator of each players’ connection quality. You can now report players who you think are cheating, which is an important addition, given that Fall Guys has historically struggled with cheaters.

GameSpot may get a commission from retail offers.