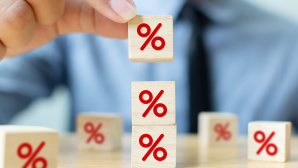 Banks grant their customers a certain amount of overdraft on their account – the overdraft facility – but in most cases they also charge fees. Comparisons show that the overdraft interest is currently between around four and almost 15 percent. Stiftung Warentest compared over 1,200 banks in 2020 and determined an average interest rate of 9.61 percent.

Contents of this article

Unlike interest on loans, overdraft interest is calculated and updated on a daily basis. The reason for this is that the account balance on a current account often changes several times a day due to transfers and withdrawals. In order to be able to calculate the overdraft interest precisely, the following formula is used:

An example illustrates what that means exactly:

Suppose you have overdrawn your checking account with 1,000 euros for 14 days. The overdraft rate is given as seven percent. Then the calculation is:

The 2.58 euros are due for the entire period of 14 days – calculated down to one day that would be 19 cents a day. How much the amount of the actual overdraft interest can differ becomes clear if the currently highest interest of (rounded) 15 percent is assumed in the example. Then you pay a total of 5.75 euros or 41 cents a day instead of 2.58 euros for two weeks.

How banks have to show the overdraft interest

In recent years there have been repeated discussions and legal disputes between consumer advocates and banks that the overdrafts are unnecessarily high and that financial institutions want to enrich themselves disproportionately from customers. As a result, since 2010 consumers have had to be able to clearly understand how banks calculate overdraft interest. In the interest rate adjustment clause, banks have since stipulated which guide value the overdraft rate is based on, for example the key interest rate of the European Central Bank (ECB). Since 2016, the Payment Accounts Act has also stipulated that customers must be transparently informed about the amount of the overdraft interest on the provider’s website. The aim is to make it easy to compare different offers.

Why are the overdraft rates so high anyway?

Assuming that banks are based on the key interest rate of the ECB, the overdraft interest should actually be at a very low level – after all, banks there have been lending money almost at zero rate for years. However, these savings are not passed on. The reason why the providers calculate the above-mentioned six, seven or significantly more percent when calculating overdraft interest is due to the high flexibility that overdraft allows customers and the associated increasing administrative costs. In addition, the agreed loan amount must be held by the bank, the overdraft facility granted must be backed by the bank’s equity – so there would be less actual capital available “to work”.

In comparison to the favorable overdraft rate

Favorable offers from various direct banks prove that these arguments and possible default risks do not necessarily have to lead to a high overdraft interest. When looking for a checking account, you should always compare different providers. Pay attention not only to the information on possible overdraft interest, but also to any additional fees. Some banks that offer a current account without overdraft interest charge monthly account maintenance fees instead.

Here you have to weigh carefully: If you know in advance that you regularly use the overdraft facility, it may be cheaper to accept an offer with fixed monthly fees. If the overdraft facility is really only intended as an emergency solution, a checking account without fixed fees is probably much more attractive.

Alternatives to the overdraft facility: banks are required

No matter how low the overdraft interest on your current account is: The overdraft facility is not suitable as a long-term solution or to finance a larger financial request. Not only are the interest rates disproportionately high, the credit line is also usually not in line with needs. In order to protect customers from permanently high interest rates and thus from over-indebtedness, banks are even legally obliged to inform you about alternatives under certain conditions. If you use 75 percent or more of the agreed overdraft facility over a period of six months, a consultation must take place.

Of course, it is even better than waiting for a mandatory consultation if you keep an eye on your financial situation yourself and plan ahead. If there is a greater need for credit, you can start comparing different credit offers in good time and in peace.

Save interest with an installment and credit line

In principle, a applies to larger sums Installment credit as a sensible alternative to the overdraft facility. In addition to better interest conditions, you can agree on a fixed term and installment payments that suit you and your financial situation. Smaller sums can be realized ideally with a credit line or call credit. You agree on a certain credit line with the bank, which you can fully or only partially use on fixed terms, but you do not have to. In addition to the usually better conditions than with an overdraft facility, another advantage is that the credit line can be concluded quickly and easily with the provider of your checking account. A credit line independent of the current account is also possible.

Even if the overdraft facility is already intended as an emergency solution, it can sometimes happen that even this is overdrawn. Some banks then block the account, increase the overdraft facility or post the corresponding direct debit back. However, some providers also tolerate the overdraft and then charge the so-called overdraft interest. And that can get really expensive: Up to 20 percent of the overdraft is due here. Although such offers are becoming increasingly rare, many banks now charge the same interest for overdrafts and overdrafts – when comparing different offers, you should still pay attention to the information on how to deal with overdrafts. Or even better: not let it get that far financially.