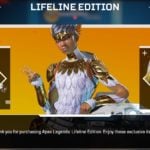 Fluid gameplay mechanics and a good story aren’t enough for a recipe for success since it only takes a bad monetization model to kill the experience like Valve’s card game Artifact. Cosmetic items have been a huge part of all the hit games throughout the last decade, like League of Legends, VALORANT, CS:GO, Dota 2, and Apex Legends.

When Apex first came out, the pool of available skins was quite limited. Most skins looked like recolors. As the game got out of its launch period, however, Respawn focused more on introducing quality skins that’d give legends a more distinctive look.

Lifeline was arguably the only legend who benefited the most from this process. Despite being one of the more popular legends, she only had recolored skins for a long time. Nowadays, Lifeline has some of the coolest skins in Apex, which makes it a joy to have her as your main legend.

We’ve gathered the rarest and the best-looking Lifeline skins so you can rescue your squadmates in style. Some of these skins may not be available in the shop since they were introduced during the holiday seasons or special events, though. This doesn’t mean they’ll never be available again, however, so it may be a good idea to keep an eye on the shop.

Blossom features the all-time favorite healer in a more edgy outfit that comes with multiple chains.

Though Blossom isn’t a legendary skin, It is still one of the rarest and unique Lifeline cosmetics in the game. It was released during the Voidwalker event, which took place in 2019.

Lifeline’s Neon Dream skin features vibrant neon colors that make her look like a disco idol from the 70s.

The skin was given away as a promotion to all paying PS Plus users in May 2019 and it’s unclear if it’s going to ever make a comeback. In case it becomes available again as a PS Plus reward or if you play on a PC, you can ask a friend who owns a PlayStation but doesn’t play Apex to claim it for you.

Battle pass skins may feel like they’re all over the place during their seasons. As soon as Apex moves onto another season, however, the last season’s battle pass skins suddenly become rarer. They also turn into a nice way to show off how long you’ve been playing the game.

The Revolutionary skin for Lifeline was introduced with the first season’s battle pass. You can notice the transition toward making more unique skins by looking at this one since it was one of the first Lifeline skins to have a face painting or a mask.

It would be hard to deny that this skin features the best possible name for a Lifeline skin.

The Pain Killer skin was released as a part of the Legendary Hunt event in 2019. The skin gives Lifeline the vibe of an Amazonian warrior and features great colors for camouflage. It costs 1,000 Apex Coins and has become one of the rarer skins since the event.

As Green Widow’s colors may indicate, this skin was a Halloween special released during the Fight or Fright event in 2019.

The skin features Lifeline in green with web patterns around her clothing. Though the green color was supposed to give her a zombie vibe, she looks more like an alien, which is also welcomed.

Holiday skins are always special. They capture the spirit of the season and are great souvenirs to have.

The Snow Crystal skin was available during the Holo Day Bash event, which took place around Christmas in 2019.

The event seasons usually bring out the best of Apex with skins that are unmatched in design. The Judge Jury Executioner is likely the favorite skin of the majority of Lifeline mains since it completely changes the way the legend looks. It was released during the Iron Crown Collection event in August 2019.

The warm-hearted field medic suddenly turns into a psychotic killer with her frightening mask. She also rocks an elegant armor with gold finishes that could be considered some of the finer details of this great skin.

At the beginning of the Iron Crown event, the only way to obtain the Judge Jury Executioner skin was to open Apex Packs that cost 700 Apex Coins. Due to immense community backlash, however, the skins were made available in the shop within a rotation. It’s unclear if this skin will be released again but paying close attention to the in-game shop during the same time it was released last year would be your best bet.

Battle passes are interactive and increase the overall enjoyment of the game for some players. They’re also the cheapest and the most reliable way of obtaining skins. Considering you get skins of the same caliber as Lifeline’s From the Ashes skin, it’s hard to skip on a battle pass.

From the Ashes was included in the third Apex season’s battle pass. It turns Lifeline into a fully-fledged demon, which was certainly an unexpected twist for her character.

If there’s a demon skin then there should be an angel skin as well. Lifeline’s Guardian Angel skin most likely represents how everyone sees Lifeline once she starts healing them to full HP from zero.

The skin is attached to the Lifeline edition of Apex, which is a bundle that comes with more than five other cosmetics alongside 2,150 Apex coins. Players can purchase the bundle via Origin, PlayStation Store, or the Microsoft Store.

The fourth season of Apex had a cyborg theme and Lifeline was one of the legends who received a thematic skin with the season’s battle pass.

Robotic pieces can be spotted behind Lifeline’s neck while the rest of her outfit does its best to keep the concept Lifeline-like. Considering the fourth season ended in May 2020, this skin should only get rarer overtime.

While the previous skins owed their rarity to being seasonal or promotional offerings, the following skins are simply harder to acquire. This is mostly because players need to own another skin to unlock them in addition to crafting materials that can only be obtained from opening Apex packs. 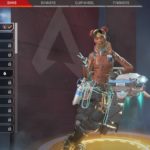 While the Lifeline Bling skin doesn’t add much to the character in terms of looks, the fact that it requires 10,500 crafting materials to unlock makes it extremely rare. You’ll also need to own the Peak Performer skin.

Considering you get 600 crafting materials for a legendary item, farming 10,500 is definitely not an easy feat. 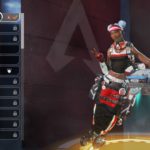 Out of all the available Lifeline skins, this one arguably has the most meaningful name. She’s the first responder to all your healing needs and the reddish style of the skin makes her look like a professional healthcare personnel.

You’ll need to have the Organized Anarchy skin to have a go at it, however, and 6,500 crafting materials. 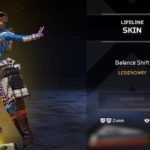 While the Balance Shift skin may look simple, it’s one of the more colorful cosmetics for Lifeline. The skin features the field medic with blonde hair and a cool blue jacket. 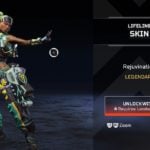 It’s unknown if the typo in this skin’s name was intentional but the color palette used for it is nothing but remarkable.