Ukrainians breathed a collective sigh of relief last month when Russian President Vladimir Putin said he would withdraw the majority of more than 100,000 troops that had been shifted to the Russian-Ukrainian border. So did the U.S., NATO and the rest of Europe.

But nobody should be breathing easy: Putin isn’t one to stay on the retreat. So, where should we expect his next provocation? Very likely, the waters of the Black Sea.

Russia invaded Ukraine in 2014 and carved off the strategically vital peninsula of Crimea, the largest land grab from a sovereign state in this century. Since then, he has supplied money, training, arms and military advisers to separatist forces in the Donbas region of southeast Ukraine.

The recent buildup was probably a signal to the West of how relentless Putin will be on pressuring Ukraine, and of his deep opposition to it joining the North Atlantic Treaty Organization. It was also a distraction from his persecution of opposition leader Alexey Navalny, and played well with Putin’s base in Russia, where his approval rating soared during the Crimea annexation. Finally, the buildup allowed the Russian military a pretty effective practice run, in case Putin does decide to roll the dice and invade across the border.

Although one should never underestimate Putin’s ability to surprise his geopolitical rivals, this doesn’t seem like the moment for a full-blown land incursion. Putin is already financially overextended with his overseas adventures. Reconstructing Syria will come with a huge bill. Support to Ukrainian separatists is expensive. He has a great appetite for expensive new weapons (militarizing space, for example). And he remains under significant sanctions from the West.

What he may choose to do instead is look seaward, and consolidate his control over the waters of the Black Sea.

I’ve sailed through Turkey’s narrow Bosporus strait at the entrance to this significant body of water half a dozen times, and I’m always struck by its strategic importance. About one third the size of the Gulf of Mexico, the Black Sea is bordered by Bulgaria, Georgia, Romania, Russia, Turkey and Ukraine. The mix of languages, cultures, alliance memberships and economic size among these nations is striking — as is the long history. According to the ancient Greeks, Jason and the Argonauts sailed these waters, and some biblical scholars and scientists believe Noah’s Ark did as well.

NATO has three full alliance members among this group (Turkey, Romania and Bulgaria), and two close partners in Ukraine and Georgia (Russia occupies land in both). Like the South China Sea, this is a potential maritime flashpoint. Additionally, it is likely to become a rich source of hydrocarbons, which will only exacerbate tensions in the region, as described in a recent study by the Atlantic Council.

Also read: Why seeing Russia and China as the new axis of evil is a non-starter

Russia wanted Crimea principally because it has excellent ports — it was the home port of the Ukrainian navy when I visited during my time as NATO commander — and commands the sea lanes between Russia and Ukraine.  In a preview of what could ignite a maritime conflict, in late 2018, the Russian navy and coast guard seized three Ukrainian military vessels as the ships were trying to enter the Black Sea through the Kerch Strait, a narrow passage separating Russia and the Crimean Peninsula. 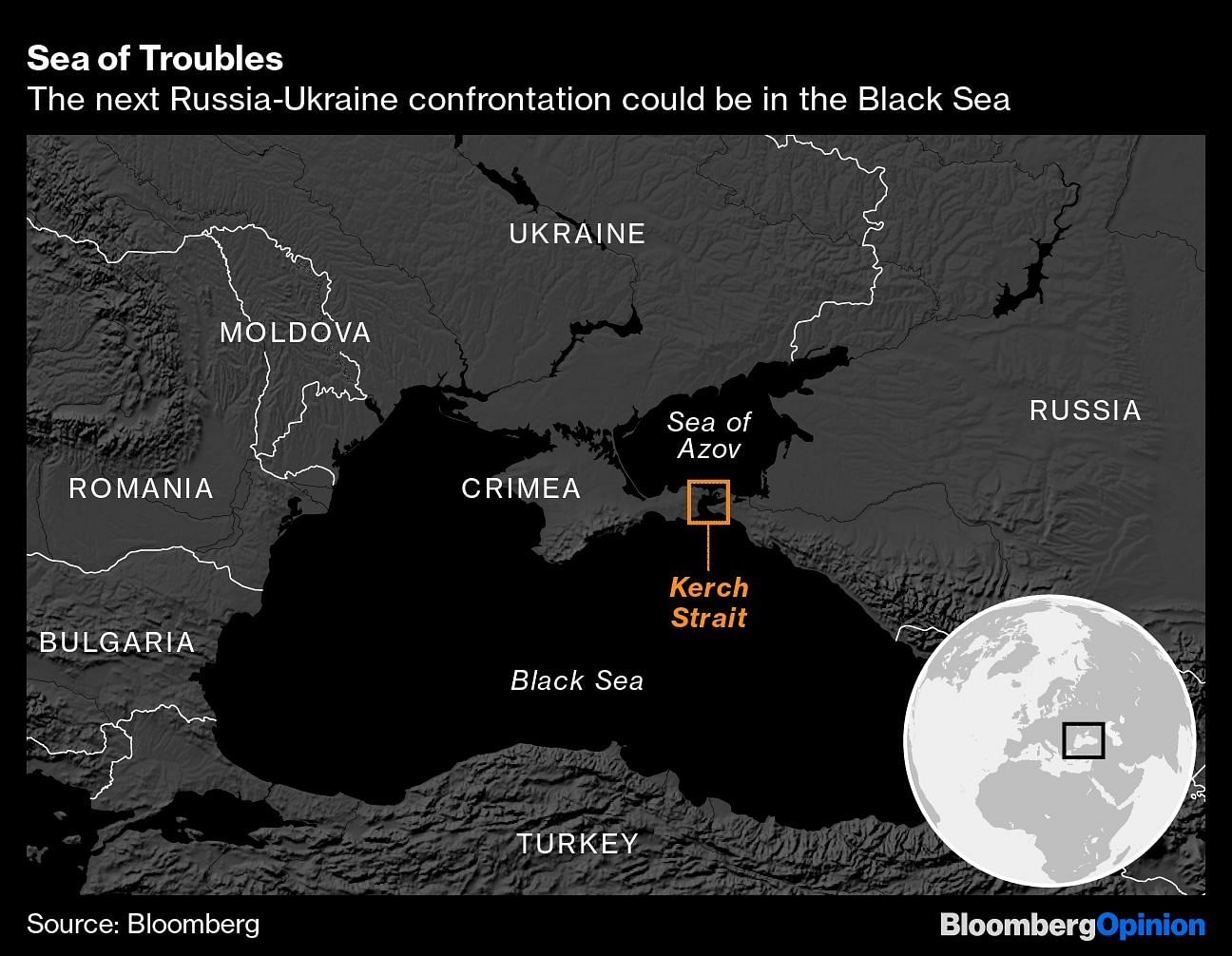 That level of tension has returned. In mid-April, the Pentagon announced it would send two guided-missile destroyers into the Black Sea, which Russia’s deputy foreign minister, Sergei Ryabkov, called “extremely provocative.” Although the U.S. abruptly canceled the ships’ deployment, the Kremlin is shutting off coastal areas near Crimea to foreign warships.

When Russia invaded Ukraine in 2014, Putin’s military used a witch’s brew of tactics and procedures. Offensive cyberwarfare, unmarked special forces (the so-called little green men), clandestine attacks on transportation nodes, propaganda over social networks, and lightning-quick conventional strikes were part of the mix. No doubt, Putin has a maritime version of this playbook.

An offensive would probably include deploying a mix of fast patrol boats with surface-to-surface and land-attack cruise missiles; helicopters based on amphibious ships to transport special forces; diesel submarines attacking Ukrainian military and civilian targets; cyberattacks to shut down Ukrainian command and control; and amphibious assaults at key strategic crossroads behind Ukrainian lines. The Russians would overwhelm the Ukrainians, and NATO couldn’t get there fast enough, even it was willing to do so.

The objective would be to neutralize the Ukrainian naval forces, gain complete sea control in the northern Black Sea, cut off Ukrainian military forces from their supply lines, and obtain dominance over a section of land that could connect Russia with Crimea. (Currently there is a sizeable chunk of Ukrainian territory between them.)

The U.S. and NATO would object strenuously. (Secretary of State Antony Blinken is paying a reassurance call to Kiev this week.) But Ukraine isn’t covered under NATO’s “an attack on one is an attack on all” security guarantee.

In the American Revolution, Paul Revere’s signal was famously to look for lanterns in the Old North Church in Boston — “one if by land, and two if by sea” — to describe the British approach. If Putin decides to move on Ukraine, you can bet on two lanterns.-Bloomberg

Classic game “Frenzic” back on the iPhone

COVID-19: Delta Plus variant, India’s new concern, what we know about strain

Classic game “Frenzic” back on the iPhone

COVID-19: Delta Plus variant, India’s new concern, what we know about strain

A Guide to Characters in the Game of Thrones Prequel