Lisa Vrooman with her boyfriend John Rock, dog Umar and cat Mochi. They love the high ceilings in their 650 square foot apartment, but keeping it cool is expensive. 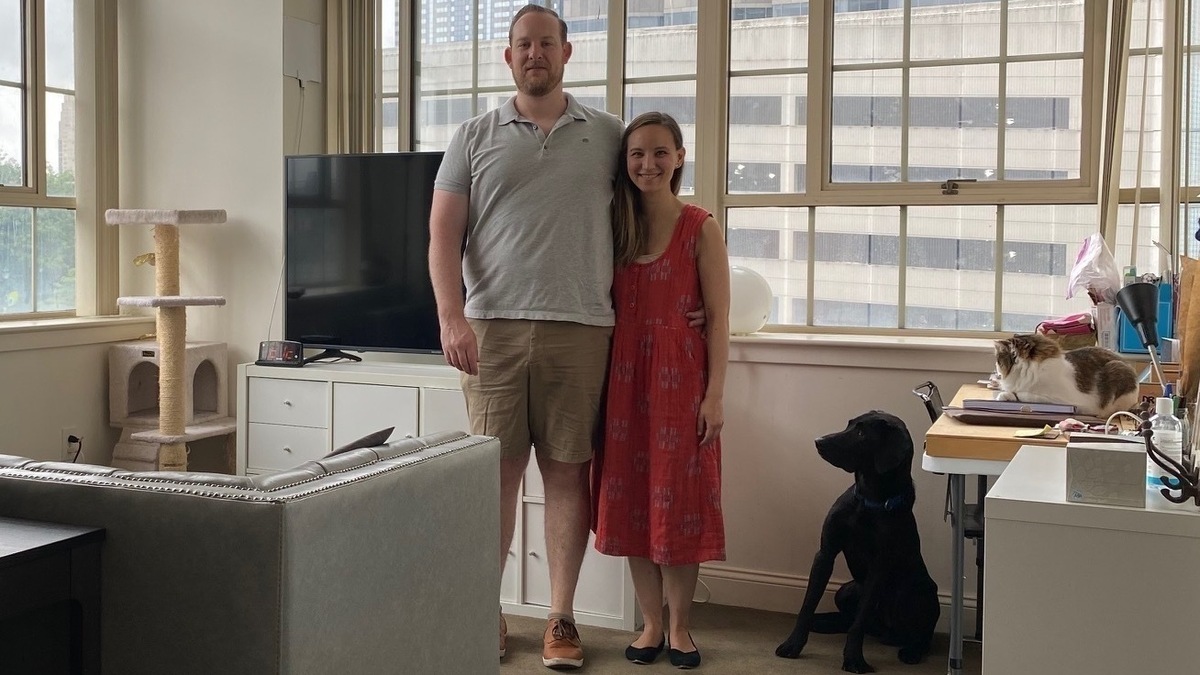 Lisa Vrooman with her boyfriend John Rock, dog Umar and cat Mochi. They love the high ceilings in their 650 square foot apartment, but keeping it cool is expensive.

“I can go outside and scramble eggs on the sidewalk,” says Glendale resident Leandra Ramirez. “That’s crazy.”

Air conditioning is essential. And now that she and her family are at home all day during the pandemic, Ramirez’s AC is running around the clock.

With lights out in many offices and shuttered businesses, millions of people – both with and without jobs – are plugging in at home. Residential demand for power in the US has soared, even as commercial and industrial use has declined.

Ramirez says her electric bill for July alone was $ 385. With four teenagers who just resumed online schooling from home, she expects her August bill to be even higher.

No one’s leaving home, and more are sleeping in longer

Electric consumption offers a window into how families and businesses are weathering the pandemic. In ordinary times, home electricity use perks up in the morning as people wake up and start the coffee, then drops during the workday, when people leave for school, work and other activities. But the coronavirus has upended that predictable pattern.

“People are sleeping in, later into the day,” says Tufts University economist Steve Cicala, who’s been monitoring electric demand. “Then it’s like a smooth increase over the course of the day because they’re at home. And I think people are staying up a little bit later, too.”

The pandemic has also blurred the usual distinction between weekday and weekend consumption patterns.

“I think this represents what a lot of people are feeling,” Cicala says with a rueful chuckle.

So far, the spike in home electricity use has not made up for the drop in commercial and industrial demand, so total consumption of electricity has declined. But Cicala says the gap is likely to narrow during the summer months, because of the demand for home air conditioning.

“Cooling an office where you have 25 people is going to require less energy than cooling 25 homes,” he says.

Lisa Vrooman shares a tiny, 650 square-foot apartment in Philadelphia with her boyfriend, a dog and a cat. It seemed like plenty of space, she says, until they were all staying in virtually around the clock. Suddenly those vaulted ceilings were not so attractive.

“The ceilings make it feel like you’re in a big space,” Vrooman says. “But that’s expensive to keep cool.”

Vrooman, who’s a post doctoral fellow at the University of Pennsylvania, says she was hit with an electric bill of $ 141 in June, an increase of 142% from the same month last year. She and her boyfriend have tried to economize. They’re “drinking more icy drinks,” she says, and doing other things to stay cool, rather than relying on the air conditioner alone.

And then there’s the water bill

She feels fortunate she can afford to pay the higher bills, especially since she’s not traveling or eating out much his summer. But she knows it’s a real hardship for many people – especially those who have lost their jobs.

“If you have no income and you now need to have your family there all the time, it’s got to be expensive,” she says.

Vrooman’s water bill has also increased, though not so dramatically.

“You’re using your bathroom at home,” she says. “We’re washing our hands more because we’re told to do that. Like, every time we walk the dog, we come in and wash our hands.”

Water utilities around the country report an increase in residential demand during the pandemic. In Greeley, Colo., Home water use is up 30% this year, while commercial use is essentially flat.

Much of that increase could stem from this year’s hot, dry weather. But the pandemic is also playing a part.

“People were certainly at home and using water in ways they had not previously,” says Sean Chambers, director of the area water and sewer department.

‘We’re all still stuck at home. Did you miss the memo? ‘

Another residential bill that’s going up is internet service. Since the pandemic began, her family keeps going over its data limit and she’s had to pay their internet provider for extra gigabytes.

“For the first few months, they weren’t charging people for overages. But apparently, in their world, the pandemic ended in June,” Ramirez says. “That’s something I reached out to them about and said, ‘Hey, we’re all still stuck at home. Did you miss the memo?'”

Ramirez expects to remain stuck at home for the foreseeable future.

There are trade-offs for the extra expenses, she says. She likes being able to spend more time with her kids. And with no work clothes to wash, she is saving money on laundry.

GitHub in the terminal: Edit repositories with GitHub CLI via the command line

GitHub in the terminal: Edit repositories with GitHub CLI via the command line